Plans have been unveiled to build the world’s first ocean-powered data centre in the north of Scotland.

Renewables developer Simec Atlantis intends to install the site in Caithness, which will be powered by its MeyGen tidal array – the largest project of its kind globally – off the mainland’s northern coast.

Simec said it has the potential to attract a “hyperscale data centre occupier” to Scotland, and that it is in discussions with “world leading data centre operators” to progress the plans.

A spokesman for Simec said the discussions are confidential but gave the examples of  Amazon, Google and Microsoft as being data centre operators’ customers.

The intention is to develop the data centre alongside an expansion of the MeyGen array, with operations from the centre targeted for 2024.

Simec has seabed leases to expand the current six mega-watt MeyGen array by a further 80MW with up to 40 new turbines, powering the centre by a new private wire network along with other local renewables projects.

The new turbines are expected to be manufactured in Scotland.

The data centre would be connected to multiple international subsea fibre optic cables, offering a fast and reliable connection to London, Europe and the USA.

A data centre is a secure facility which houses IT infrastructure such as networked computers and data storage.

The firm did not give an estimate on the cost of the project is expected to cost as that would be handled by the data centre operator.

Caithness has been chosen as it “benefits from low temperatures to assist cooling of the data centre”. It is also relatively close to the MeyGen array. 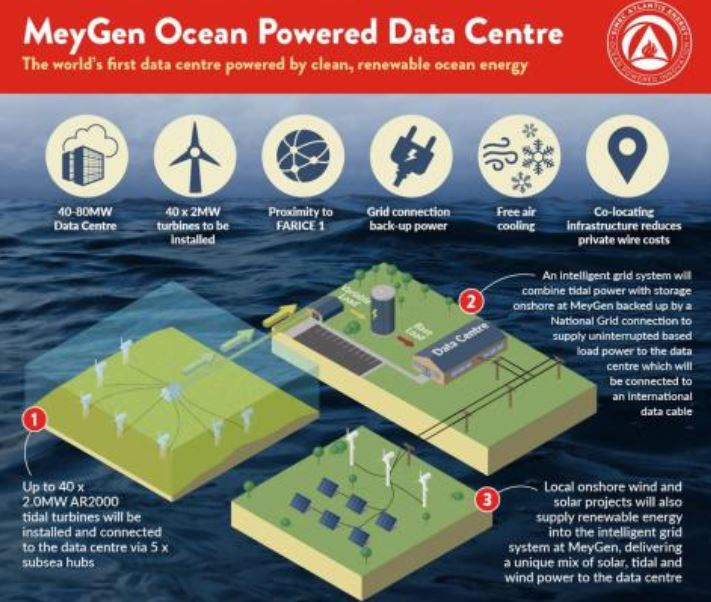 Chief executive Tim Cornelius said: “Data is being touted as the new oil. It is arguably becoming the world’s most valuable resource, and the amount of data requiring storage is increasing at a staggering pace.

“However, data centres are undeniably power hungry, and the clients of data centre operators are rightly demanding power be sourced from renewable and sustainable sources.

“This exciting project represents the marriage of a world leading renewable energy project in MeyGen with a data centre operator that seeks to provide its clients with a large amount of computing power, powered from a sustainable and reliable source – the ocean.”

Last year a similar project was carried out by Microsoft when the company sunk a data centre in the sea off Orkney to investigate whether it can boost energy efficiency.

The theory behind it was that placing it underwater would save cooling costs for the computers.

Simec Atlantis has been working with multinational engineering firm AECOM on the feasibility of this new project.

The firm is part of business tycoon Sanjeev Gupta’s GFG Alliance, which took a 49.99% stake in Simec Atlantis in 2017.

Mr Cornelius added: At MeyGen we have many of the ingredients to provide clean power to the data centre, including a large grid connection agreement, proximity to international fibre optic connections and persistent cool weather.

“We also believe that Scotland can play a key role in the global data centre industry thanks to its ready access to clean energy and we are eager to play our part at Atlantis to turn this potential into reality.”